The debate between 338 Lapua and 300 Win Mag has existed for nearly as long as the two cartridges themselves. It is almost similar to that of the 338 win mag vs. 300 win mag.

Consequently, if you’re in the market for a hunting rifle and looking at these two calibers, you must know what they are before buying one.

With both of them being heavy-hitting rounds, there is very little difference between them regarding velocity, energy on target, or penetration. However, some slight differences make one better than the other, depending on what you need it for.

It is time to take an unbiased look at both of these great rounds, understand their differences, and determine which one would be best suited for your specific needs.

The .338 Lapua Magnum is a rimless, bottlenecked cartridge designed for long-range shooting and sniping. It was developed in the 1980s by Research Armament Industries (RAI) of the United States primarily as an anti-personnel military cartridge. It has since found popularity among civilian shooters and hunters. The .338 LM operates at high pressures, such as those generated by its parent case or other cartridges in this class; it should not be selected for +P loadings. 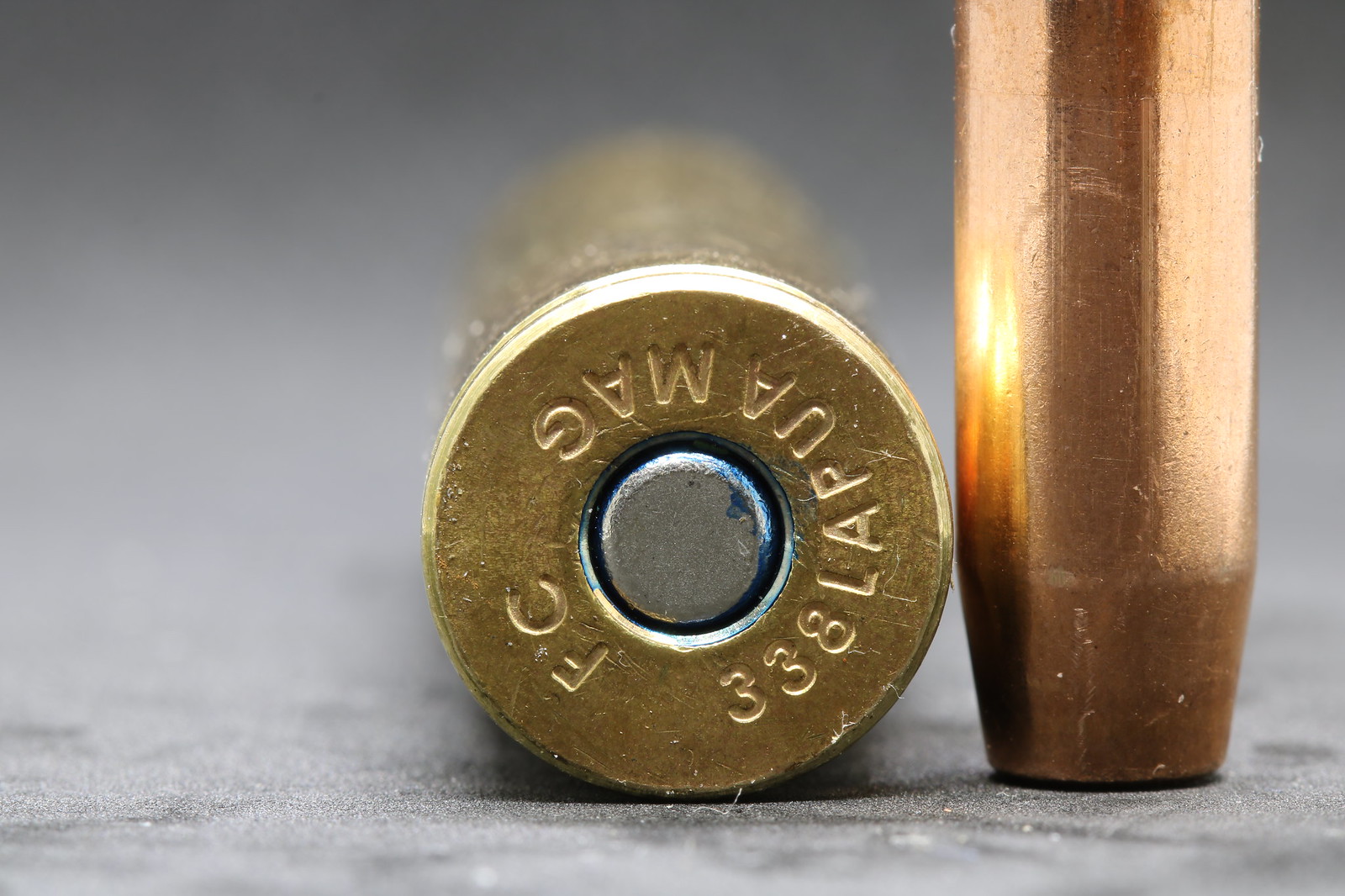 This means you can shoot factory ammunition rather than handloading to get higher velocities.

The .338 is one of several calibers that came into existence with only specialized uses such as hitting extremely heavy targets from planes or ships, very long-range sniping, or extreme ranges like military and law enforcement applications.

Originally called the .338/416 Rigby during development, it was later renamed “Lapua Magnum” and was designed for use with rifles capable of handling powerful cartridges feeding on a single-stack internal magazine.

The .338 Lapua Magnum provides more power, while still keeping a standard size platform, than other ultra magnums like the .375 H&H Magnum, which can be used in very large platforms but are inefficient when using a bolt action rifle design due to size limitations.

The .300 Winchester Magnum is a great round for hunting. The Winchester Ammunition Company originally designed it in 1963. They had been working on it since the late 1940s and finally released it in 1962 to compete with other rifle companies introducing new magnum cartridges of their own.

The bullet itself has experienced many changes throughout its production years before being made available to hunters everywhere. Due to military needs in wars such as Vietnam, where they needed something more accurate than an M-14 but faster than a 30 caliber round at long distances.

Hunters began testing various bullet sizes, including different weights and nose shapes until Winchester Ammunition Company made a .300 caliber 165-grain hollow point boat tail bullet that was very accurate. This became the first popular hunting round of its kind, used by hunters across America for years to come!

The .338 Lapua is very similar to the .338 Remington Ultra Mag. It has a cartridge loaded with bullets, such as those used in Magnum rifles and for big game hunting. The round came from two different cartridges – one being the .416 Rigby and the other being the .450 Nitro Express.

Because of the .338 Lapua range, it makes a perfect caliber for tactical missions. It can go up to 900 meters, which makes it great for sniper rifles, and it can travel at supersonic speeds over this distance while maintaining accuracy.

It can be used for hunting or sport shooting purposes since it offers an excellent performance decreased by bullet muzzle velocity at 300 m/s (985 ft/s) below 600 m/s (1970 ft/s).

Here are some important specs to consider.

The 338 Lapua’s cartridge length is almost twice as long as 300 and can hold more powder, giving it an advantage in velocities. Additionally, the .338 has a greater range and power than the 300 because it has more striking force, better armor penetration, and deadlier wound channels but is slightly heavier and bulkier.

The ballistic for both cartridges are similar but with a slightly different bullet weight. The 338 Lapua is one of the most popular long-range rifle cartridges because it can push past 1000 yards without much drop and with better wind resistance than other similar rounds such as 300 Win Mag or 308 Winchester.

The 338 Lapua cartridge has a slightly flatter trajectory than the 300 Win Mag, making it an excellent choice for shooting at very long distances.

The ballistic coefficient of the .338 Lapua rounds is around 0.62, while.300 win mag rounds tend to be about 0.58 or lower (depending on bullet weight).

This means the former will slow down less over its flight path compared to bullets fired from .300 Winchester Magnum rifles due to drag effects (the higher BC number meaning reduced drag; this fact makes you realize why they call them “um” cartridges – “um” is the scientific term for “microseconds,” which are fractions of a second). The higher BC allows you to take advantage of longer ranges.

The 338 Lapua is used primarily for long-distance shooting, and as such, has very high recoil. The 300 Winchester Magnum, on the other hand, was designed with hunting in mind, so it’s got slightly less kick than its counterpart.

It’s important to mention that both of these cartridges have significant recoil and can be uncomfortable to shoot at first if you aren’t prepared.

Suppose we expand the question out to include all magnum calibers. In that case, we might say that the .300 Win Mag kicks more than most of them (including some rifles). But not as much as many others, like those found among big bore dangerous game rounds meant for African elephant or Cape buffalo trophy hunts; one example would be how the .416 Rigby kicks, so much more than the 338 Lapua.

If you have impeccable hunting skills, you’d want to make sure your firearm has just about enough killing power to stop down your game in its tracks. Therefore, one of the hottest topics in this debate will be how much damage these calibers make. Additionally, you’d want to be sure you have the best scope for 300 Win Mag or a 338 Lapua scope for improved accuracy.

The 338 Lapua and 300 Win Mag are large-caliber rifle cartridges with very high killing power. The difference between the two is their ability to penetrate through tough objects such as steel, glass, and ballistic vests, which determine the specific purposes they serve.

While the 338 Lapua can easily go past these obstacles, it requires great skill from its user. In contrast, the 300 Win Mag does not require much experience or technique due to velocity and less recoil than its counterpart, making it easier to shoot accurately.

For hunting purposes, since there aren’t many limitations on how far away one can shoot with either cartridge, you would want to use a bullet of lower weight if going further ranges because a heavier bullet needs more powder behind it, thus a larger cartridge which means a more powerful gun.

338 Lapua: the killing power of the 338 Lapua is .50 BMG, while 300 Win Mag has a killing power of .30-06 Springfield. Therefore, we can conclude that the bullet with a higher caliber will have a greater effect on its target, making the 338 Lapua a better choice for hunting purposes due to its penetration capabilities.

The 300 Win Mag and 338 Lapua have heavy recoil, making them challenging for beginning shooters. Both rifles can be used in extremely cold weather. However, the .338 Lapua is better because it has more bullet choices suitable for colder climates. Over time, you will need to replace some components on your rifle, such as scope rings or bolt carriers.

The 300 Win Mag requires different parts due to its larger size, while the 338 needs even more common parts replaced over time. But if you stick with good quality brands, then this won’t matter too much. It’s worth noting that most high-quality aftermarket suppliers carry replacement parts of all kinds for both calibers, so it isn’t an issue.

The 300 Win Mag is good for hunting medium to large game at long distances, while the 338 Lapua is more of a competition round used in long-distance shooting competitions. For this reason, it may be better suited for hunters trying to make every shot count on big prey like elk or moose.

However, the .338 can also be useful if you want accuracy without too much recoil, but still want to have enough power to take down an animal quickly and humanely. There is no clear winner in this rivalry, just as the 300 Win mag vs. 338 Win mag. It all boils down to personal preferences and the task ahead.