This article will discuss holographic vs reflex sight in detail. The holographic sight is a weapons sight system which uses a laser diode to create an aiming point using the hologram technology.

What Is A Reflex Sight? 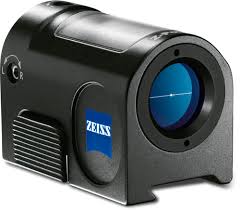 The “weapon sight” or “sight” is used to aim. There are however a few differences and the experts of weapons and shooting contradict as to which is the better. Here is a detailed description of the Reflex vs Holographic sight.

It also explains the various aspects of each of these weapon sights with respect to the projection system, the size and shape, and the reticle. When in the field both these sights serve the same purpose. The difference is only in technology.

The Difference In The Projection System:

The basic difference between the projection system of a reflex vs holographic sight is that a reflex sight is that the reflex sight makes use of a LED and an objective lens. These two create a reticle within the sight window. The purpose of the objective lens is a mirror which reflects the light from the LED back for the shooter’s vision. The projection thus formed is clear and accurate. The reason there is a red dot is that the lens can only reflect red wavelength from the LED.

A Difference In The Reticle:

When it comes to versatility the reticles of reflex sight is better and offers more colors than the holographic sights. The reflex sights can take various shapes such as circular shapes, points, crosshairs, etc. A holographic reticle is not as versatile as the reflex reticle.

A Difference In The Size And Shape:

The reflex sights are in tube form or in the tube configuration. The tubes are much shorter. In these weapons, the shooters will find the elevation knobs and windages on the bottom of the tube and the top of the tube. The diameter of the tube is larger for a reflex sight system.

The holographic weapon sight has a square configuration. The configuration of the internal mirrors makes the shooters viewing mirror square. The depth of the viewing window is shallower than the reflex sight.

So, if a shooter wants a square viewing then he needs to get a holographic sight weapon. If a shooter prefers round shooting mirror weapon then he should buy the reflex weapon sight.

For an ordinary shooter, the battery timing is not an issue at all. But for those who want to practice shooting, they should get the one that lasts longer. 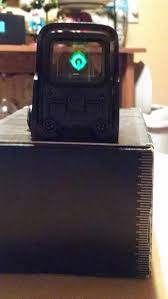 One of the most important aspects of shooting is image clarity. The aiming point may be accurate but if the image is not clear the shooter cannot aim properly. The shooter cannot shoot at the intended spot.

When it comes to image clarity the holographic red dot sight win the race. The reflex sight presents a darker image. The holosight weapon will always give a clear and bright image due to the projection technology.

Above everything, the main goal of every shooter is to hit the target. You may have the best gun collection, but if you went out to fire but fail to hit the target then virtually it is useless to have that collection. On the other hand, if the precision of your weapon is sub-optimal then the sight you would be using will create a huge difference in precision and accuracy.

Iron sights are one of the reliable old technologies that get the job done with minimal fuss and for most of the people out there, it is what is actually needed. But if you want to possess technologically supported accuracy then a red dot or a holographic sight is a must for your firearm.

Then again as soon as you step into the advanced accuracy then you have to make the choice between a holographic sight and a red dot. 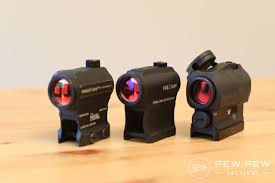 Both of these sights consume power that is delivered by an integrated battery. The LED light on the red dot makes use of lesser power while the holographic sight is offered with advanced laser-based technology. It is something to take care of the consumed power.

You will be able to shoot it only when you will be able to see it. Both these sight options amuse you with a visual advantage over a traditional sight or the other scopes. When it is about the red dot sight, the aiming point is known to cover the target,

while in holographic the target is surrounded by the laser image. With both the options for the reticles, accuracy is enhanced for the users and then there is a reduction in the time that is taken to aim and then to fire.

One of the advantages of holographic sights over the red dot sights is their design. On the other hand, one of the drawbacks that are seen in both the holographic as well as the red dot is the tendency for the image illuminations.

In all kinds of shooting scenarios, the distortion that is caused by the position as well as angle of the firearm is one of the main obstacles to overcome particularly when the timing is the best shot to be made. With both the sights, the angle and position of the gun do not matter and may not be perfect.

When you will zoom in the target, the dot size will enlarge itself as well. The target will be little closer however the dot will be bigger and at times it may be covering the aiming point.

In holographic sight, the target will appear to be closer however the aiming circle or the dot will have the same size. It enabled the shooters to have visual acuity even on the long-range shots. In general, both these options of sights do not have the same abilities of magnification possessed by other optics.

In simple words, the red dot sight will put an illuminated dot in the visual image there on the lens. Technically talking, LED beam light is beamed on the lens. The lens is coated with reflective material which reflects the light back into the eyes of the shooters.

This gives the impression that the dot is resting on the target. You can access them for both the rifles as well as the handguns. These are useful for those who are in need of faster target hitting speed.

On the other hand, with the red dot sight, the sight is quicker, prevents the searching frustration and more accurate in targeting in the dust. Red dot enables the close proximity shooting. In case most of your scenarios need you to shot lesser than 200 yards, then this type of LED sight will amuse with an advantage over an aperture iron configuration. 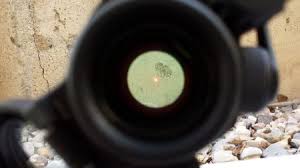 The more advanced design of these holographic sights is pretty much similar in the user application just like the red dot sights. The main difference is how the creation of the image occurs with a holographic image and what shooter actually sees through the optic.

Rather than a LED light, the holographic sight creates an illuminated pattern or a dot through the laser and then reflects off a grid. Such an image is perceived to float over the target by the marksman.

In short, choosing the right sight for your firearm will break or make the accuracy of any kind of gun. You can well see the fact that there are no diversified images offered by both the types of optics, and make the choice easier for the consumers.

Holographic as well as red dot options will facilitate in accurate shot placement. However, following your needs and requirements, you may outshine the one over the other option.

Reflex sights are usually common and least expensive and somewhat limited. It all depends on your needs; a simple reflex sight may meet all your needs. Holographic sights are similar to exposed reflex sights, however, higher in quality at a higher price range. All in all, in today’s technology-driven world, there is a reflex sight out there that will meet your customized needs and requirements and at a reasonable price indeed. Spend some time and look for what you actually need for your firearm.

However, the final decision will always be yours. We all have different requirements, physical capabilities, price affordability, and so much more. It is due to these certain reasons that we cannot generalize things.

But then again, talking about the technical features and specifications, we can say that holographic sights are better than the reflex sights. You will not regret spending your hard earned income on buying these holographic sights. Hope after this article you know all things about Holographic VS Reflex sight.

Must Read Our Article: 10 Reasons To Choose Red Dot Sight